Our on-going analysis of the deposit dilemma shows some good news for community and regional banks, based on 2019 third-quarter data. But trouble still looms.

Overall, community and regional banks showed signs of life for the first time in nearly two years in the transaction account markets.  If this indicates a trend, it will certainly help community banks better manage their cost of funds.  But if deposit growth does not accelerate – even though it picked up in the third quarter – community banks will face continued vulnerabilities.  Low loan growth and a pause in Federal Reserve monetary policies do not provide a great recipe for deposit growth moving forward.

The first half of 2019 saw weak deposit growth—just $100 billion of net new deposits. The third quarter, however, saw total grow by $232 billion, the biggest increase since the fourth quarter of 2018.  Whether it’s a one-time blip remains to be seen.

But our deeper dive into the movement of deposits reveals some interesting patterns in the third quarter.

Banks of all sizes were a winner in the third quarter of 2019, with each tier recording gains in transaction accounts. In fact, the Top 4 banks eked out the smallest gains in the quarter, despite their recent dominance.

Despite the growth in transaction accounts, community and regional banks did not grow enough to maintain their market share. This is concerning because if this quarter’s results hold steady, community banks appear to be dependent on growth of the entire pie to grow their own deposit slice. In other words, they will lose in a zero-sum game, as previous quarters indicate. 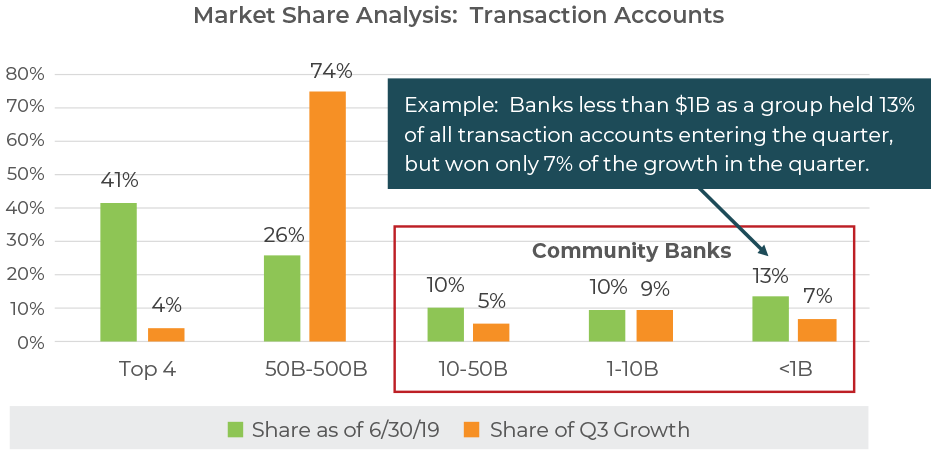 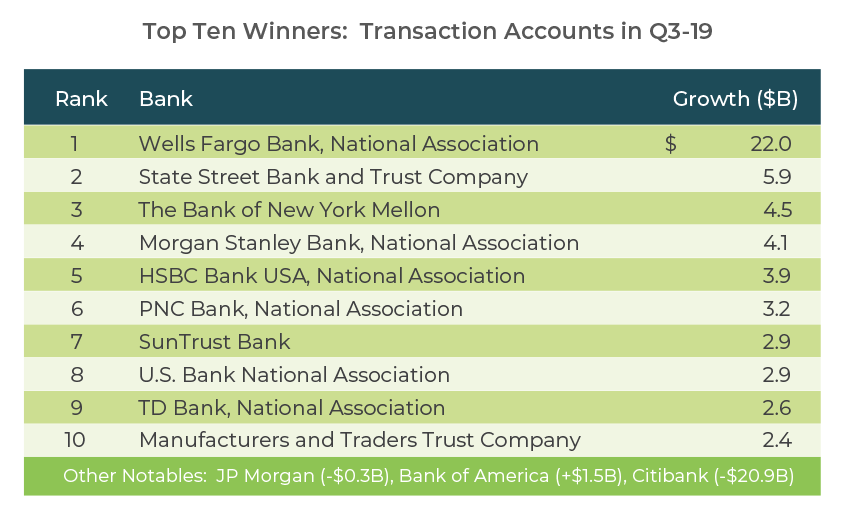 I am not sure what explains the dominance of this group, but I do find it interesting that the banks ranked numbers 2, 3 and 4 (State Street, BONY Mellon and Morgan Stanley) are investment houses, not traditional commercial banks. 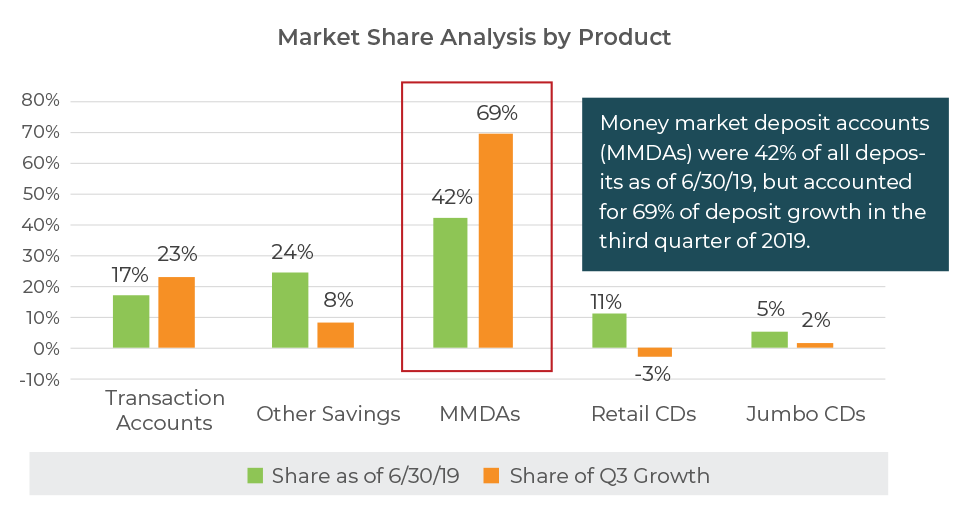 Community banks continue to rely on MMDAs more than usual to drive deposit growth, relative to historical percentages. This was especially true for banks with assets between $10 billion and $50 billion, which relied on MMDAs to drive 75 percent of their deposit growth even though they represent only 42 percent of deposits historically, as the chart shows. The same can be said though for the Top 4 banks, although Citibank accounts for $50 billion of MMDA growth on its own.

Many bankers I speak with are talking about the increasing competition to win MMDAs.  Unlike CDs, MMDAs do not have a maturity date, so community banks need to be careful about paying so much for MMDAs that they approach CD rates, yet without their benefits.

However, growth in these accounts came to a grinding halt in the third quarter.  Savings accounts finished a distant third to MMDAs and transaction accounts and Retail CDs declined.

I should mention that the $1 billion to $10 billion asset-size group of banks outperformed the industry in the savings account market.  This group won $10.1 billion, or 51% percent of net new savings accounts in the third quarter.

It is likely that the impact of the Fed’s rate cuts started to tweak depositor behavior.  High yield digital offerings on both savings accounts and retail CDs are less attractive than they were at the beginning of the year and prior to this recent rate cut cycle.

The Top 4 banks, each with a loan-to-deposit ratio well under 70 percent, are not reaching for deposits and competing on price.  They are also not making many loans and will be patient as they execute their branch expansion plans to help them offset the impact of QE reversal and comply with the Liquidity Coverage Ratio.  On the other hand, the increasing dependence on highly competitive MMDAs by community banks will likely continue to prevent their cost of funds from material improvement.  As long as there are community banks that exist with uber high LTD ratios well in excess of 100 percent, there will be banks in the market offering aggressive pricing on MMDAs, even though the Fed has now delivered a third rate cut.

To wrap it up, the third quarter numbers bring some hope to community banks. But they continue to remain vulnerable if overall deposit growth does not accelerate.

— Adam Mustafa is the CEO of the Invictus Group.