September’s repo market problems were front page news.  But until JPMorgan Chase CEO Jamie Dimon spoke up last week, no one knew why the banks did not step in as rates kept increasing, even though they had excess reserves. The reason: compliance with the Federal Reserve’s liquidity coverage ratio (LCR).

Invictus predicted over a year ago that the Fed’s mission to reverse QE (i.e. normalize its balance sheet) would create significant issues for the large banks because it would apply pressure on their ability to comply with the LCR.  The disruption that occurred in the repo markets on September 17 was simply a symptom of this problem for the large banks, even though the Fed paused its QE reversal seven months ago.

What does this all mean for community banks?  It means that last year’s Invictus prediction is now a reality:  the large banks will respond to this pressure by competing more aggressively for deposits to ensure compliance with the LCR. By adding deposits to the right hand side of their balance sheet, the large banks are able to increase their ‘cash and cash equivalents’ on the left hand side of their balance sheet. Reserves that the large banks keep on account at the Fed are a form of cash equivalents, and for every dollar of deposits the large banks add, their required reserves increase by 10 cents, and their excess reserves by 90 cents. It is the latter that matters. They want, if not need, to increase the amount of excess reserves they hold. The excess reserves enable them to actively participate in the repo market, as well as ensure compliance with the LCR.  There are plenty of other reasons the large banks want more core deposits.  Besides the obvious, the large banks also want core deposits as an insurance policy against a negative interest rate environment; they essentially become a source of revenue as opposed to an expense in such a scenario.

In particular, the large banks are targeting transaction accounts, which are the crème-da-le-crème form of deposits.  An Invictus study using the BankGenome™ intelligence system shows that the top four money center banks and the super regional banks ($50B-$500B in assets) dominated the market for transaction accounts in the second quarter of 2019 versus the community banks: 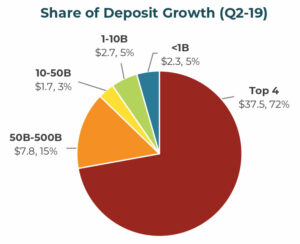 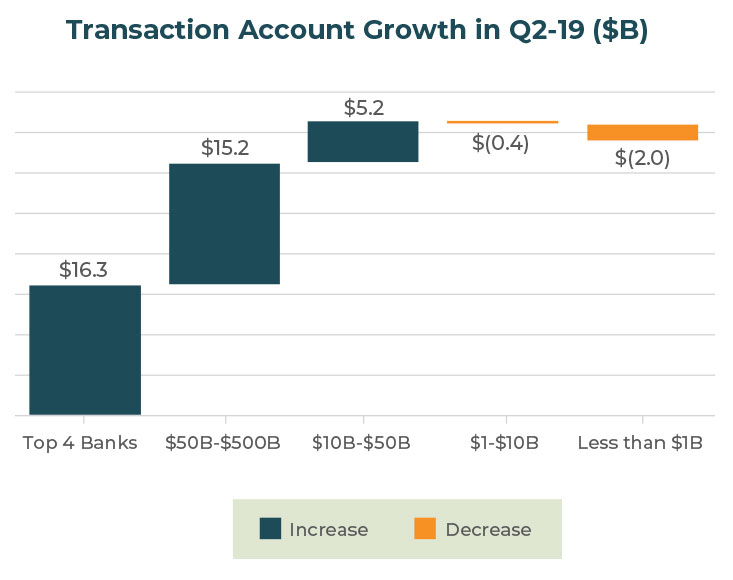 For community banks with high loan-to-deposit ratios, this is a problem. The silver lining is that the Fed has delivered on two rate cuts so far this year, which eases the pain of having to borrow the next dollar at the margin (i.e. the price of market CDs, FHLB borrowings, or brokered/listed deposits).  However, the problem has only shifted toward the loan portfolio, where reduced loan yields on floating rate loans and new loans are leading to an escalation in NIM compression.

The bottom line is that the competition for core deposits will only be escalating as the large banks look to restock their LCRs.  Any community bank in need of deposits that is willing to rest on its laurels because of a couple rate cuts is making a serious mistake.

(As a brief side note, there’s more than meets the eye in the repo situation. Although the large banks would be reducing their excess reserves by lending them overnight, in a repo transaction the collateral they receive is of the highest quality (Treasuries, agencies, etc.) and would be considered ‘high quality liquid assets’ for purposes of the LCR.  In theory, lending out excess reserves overnight should have no impact on the LCR.  So, what gives?  My theory is that there is an unspoken regulatory expectation that large banks keep a minimum percentage of their ‘high quality liquid assets’ in the form of excess reserves, which thereby puts a constraint on the banks.  Am I saying there is possibly a de facto required amount of excess reserves?  What an oxymoron!)

Adam Mustafa is Chief Executive Officer of Invictus Group.  Invictus helps community banks in need of deposits alleviate their challenges via an M&A process that creates negotiated transactions with banks that have attractive core deposit portfolios.