27 Sep MOE Tips from CEOs: Culture, Excitement and Details Matter to Get the Deal Done

MOE Tips from CEOs: Culture, Excitement and Details Matter to Get the Deal Done

MOEs require a different mindset and attitude, particularly on the part of CEOs. See “What Makes MOEs Unique—and How to Avoid Their Pitfalls” in this issue.  Here are some tips garnered from the public statements of CEOs involved in recent transactions.

Make sure the banks have similar cultures.  “The culture of a partner was of the utmost importance when we considered this transaction,” said Bruce Cady, CEO and Chairman of County Bank.

Build excitement and stress equality.  BB&T Chairman and CEO Kelly King told analysts that the secret to a successful MOE is “that the two leaders genuinely, honestly mean equal…. You have to really be truly committed to equal because when you are truly committed to equal, then everybody gets excited and passionate about it and you really do pick the best of both organizations. And I’ll tell you, having been through one, it’s just pretty incredible. Every organization has great parts, but every organization has weak parts. And when you get a chance to marry two great organizations and pick the best from both organizations, you get great-great.”

Get the hard details out of the way.  SunTrust Chairman and CEO William Henry Rogers said the two CEOs “checked the boxes” on the essentials. “We had board, we had management, and we had transition all identified and locked down. But I think most importantly, and I can say this for the conversations we had, is everything went to the middle of the table first. I mean nothing started at the edge of the table in the conversations. Everything went in the middle of the table, headquarters, name, all those things that people get caught up in.”

Know your peers. Rogers and King knew each other through years of discussions at industry conferences. So when  the SunTrust/BB&T merger was first floated as an idea during SunTrust’s annual strategic planning meetings in 2018, according to a joint proxy statement/prospectus, it was easy for the two men to connect. 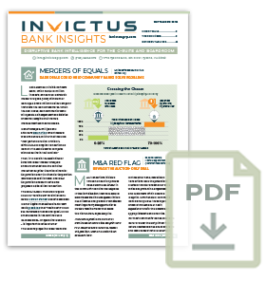