05 Nov Read Between the Lines

10 Percent Capital Should Be the Norm: Hoenig

Rolling back post-crisis capital standards on the largest banks is a big mistake that will “undermine the long-term resilience of not only the banking system, but the broader economy as well,” outgoing FDIC Vice Chairman Thomas M. Hoenig warned in a speech at the Peterson Institute for International Economics in Washington, DC. Hoenig repeated his call for a capital ratio of 10 percent equity to total assets as “the minimum standard for every bank wishing to operate in the United States.” He said studies show stronger bank capital contributes to a more sustainable economic growth, despite widespread views to the contrary. “The failure to better understand the nature and disparate effect of regulations on the industry will be to increase the costs of banking and encourage ever-greater consolidation of the industry,” he said.

Fed Vice Chair of Supervision Randal K. Quarles is responsible for developing policy recommendations regarding supervision and regulation. It’s a role that was established under Dodd-Frank, but never officially filled. (Former Fed Governor Daniel Tarullo largely was the voice of regulation under the Obama administration). In recent speeches, Quarles has given a hint of how he views his role: “Put simply, our role as supervisors should not be to play “gotcha” with our banks, but to support their compliance efforts,” he said in March at the HOPE Global Forums annual meeting in Atlanta.

In January, after three months on the job, Quarles said he wanted to review the efficiency of regulation to make sure costs were outweighed by benefits. “In other words, if we have a choice between two methods of equal effectiveness in achieving a goal, we should strive to choose the one that is less burdensome for both the system and regulators,” he told the American Bar Association Banking Law Committee Annual Meeting in Washington, D.C. He also said he didn’t believe that tailoring regulation should be solely for small firms, and that stress testing supervisory disclosures should “go further.”

Look for communication to improve with your safety and soundness examiner. Beyond tailoring exams based on risk, regulators are working on guidelines to make sure that regulators communicate their objectives “before, during and after examinations,” the Federal Financial Institutions Examination Council (FFIEC) announced. That means letting banks know how to prepare for what examiners want, including spacing needs, staffing and logistics. Regulators are also exploring ways to use technology to shift exam work off-site and to improve electronic file transfers.

Troubled banks will have a better chance of getting a material supervisory determination appealed faster under new rules proposed by the Fed. The proposed rule would eliminate one level of appeal, and also speed up appeals about issues that would cause an institution to be critically undercapitalized and in need of a receiver.

One reason fintech innovation may be outpacing the U.S. overseas is because the U.S. regulatory structure is a challenge for fintech firms, the Government Accountability Office concludes in a new study. While some U.S. agencies have established innovation offices, others — including the FDIC and the NCUA — have not. Regulatory sandboxes and proofs-of-concept are rare in the U.S., but more common internationally. Agencies need to collaborate more, which will not only encourage fintech firms but also allow for proper oversight to protect consumers, the GAO reported.

Acting Consumer Financial Protection Bureau Director Mick Mulvaney has called on Congress to alter the Dodd-Frank Act provisions governing the CFPB. In the latest CFPB semi-annual report. Mulvaney asks Congress to fund the bureau through Congressional appropriations, require legislative approval of major bureau rules, ensure that the director answers to the President, and establish an independent inspector general over the agency. Such moves would limit the bureau’s power, and could lead to its demise if its funding was cut significantly. “The Bureau is far too powerful, with precious little oversight of its activities,” Mulvaney said. “The power wielded by the Director of the Bureau could all too easily be used to harm consumers, destroy businesses, or arbitrarily remake American financial markets.” 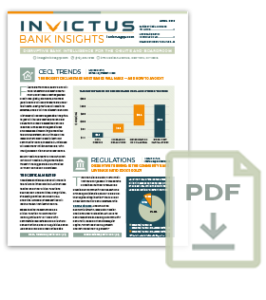