Make no mistake about it: If your bank has commercial real estate (CRE) concentrations that are at or above the suggested regulatory guidelines, examiners will expect to see a current comprehensive stress test that supports your concentration risk management plan.

Stress testing has never been mandated for community banks—but it is a tool that examiners expect banks to use if they have concentration issues in their portfolio. And this isn’t going to change, no matter what bills are adopted by Congress to ease the community bank regulatory burden.

How the New CRE Focus Emerged

The Federal Reserve was the first to sound the alarm about a new potential issue with commercial real estate concentrations, according to the Government Accountability Office. The Fed told the GAO it began

Lack of data is by far the biggest obstacle for banks as they begin figuring out how to implement the new current expected credit loss (CECL) accounting standard, which will go into effect for many public banks in 2020. Even the simplest of methods, such as the open pool method, require a certain amount of historical loan-level data.

Banks face a litany of problems with respect to leaning on internal data for CECL, but here are the three most common obstacles:

An Example of Why Data Matters In CECL

Example: A bank has a significant concentration of its commercial real estate loans risk rated a 4. Those loans will have a range of debt service coverage ratios (DSCRs). Some will have DSCRs greater than 2

Jelena McWilliams officially took over the helm of the Federal Deposit Insurance Corp. in June. Her resume includes stints as chief counsel of the Senate Banking Committee, an attorney at the Federal Reserve, and chief legal officer at Fifth Third Bancorp, a Cincinnati-based regional bank. She replaces Martin J. Gruenberg, who, for now, remains on the FDIC board. Some Democrats would like him to take over the open vice-chair seat, left vacant after Thomas J. Hoenig retired at the end of April. Gruenberg has not indicated what he wants to do. His board term is over at the end of 2018. 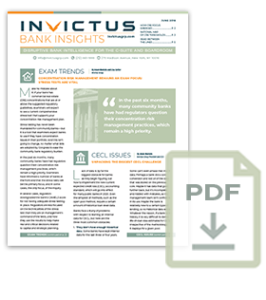